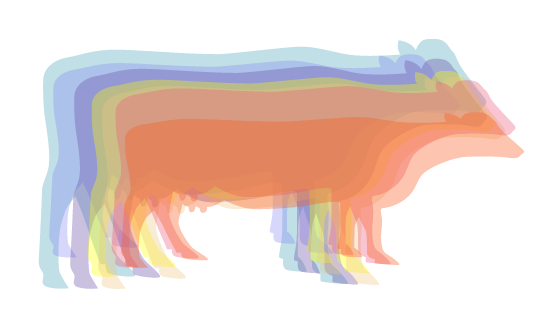 Today, the daily create is to paint a cow. I for one chose not to paint, but instead to spin around 453 times under the instruction of my two year old daughter and see what a cow looks like then. The result is above. This method causes no trauma to or paint on the cow. You may not want to do it to yourself more than zero times though. 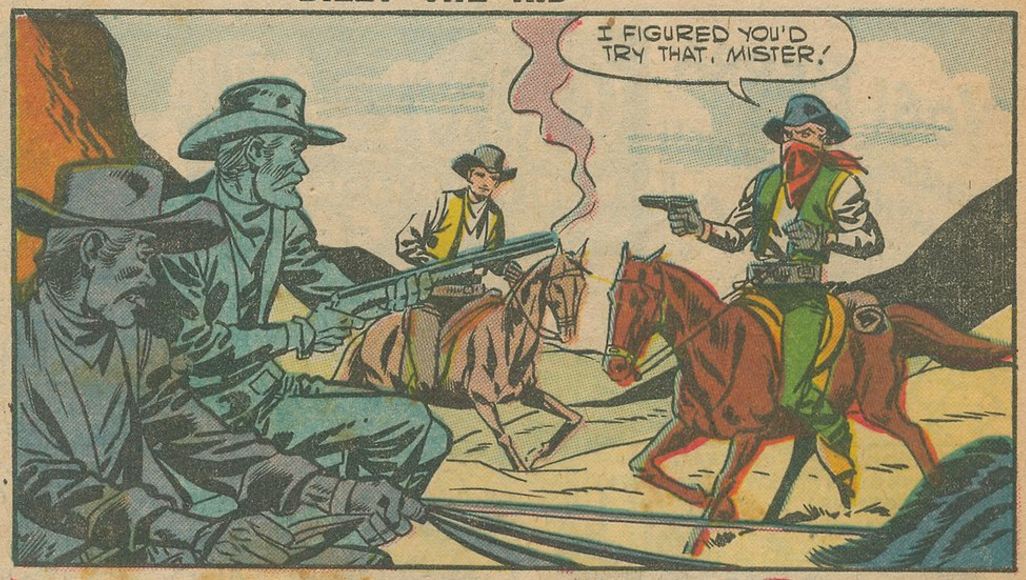 Full Disclosure: As an Open Participant with full-time work and a lovin’ family, I ain’t got a lot of time to ruminate on this here course. So what I got to give (and get), I got to give and get it quick. Enjoy it, but quick.

Today I watched the lecture and read the article about our Personal Cyberinfrastrcuture. And let me tell you, I dig this stuff. And the Wild West motif fits so well. Progress is messy and we don’t know where to start without a little help. Give me an idea of the equipment I can use and which stuff works and I’ll get started. Without the equipment, I’m just going to lie down in the sun here. Get some rest. Then get some more. With this stuff I’m gonna saddle up and go looking for gold in exciting places.

This course/not course has given us that equipment by suggesting to us what to go out and get. Now I got a bunch of stuff, some idea how to use some of it, and most importantly, a drive and excitement to see what comes of it. I have a Soundcloud app on my phone. Still don’t know what it’s for exactly but I look at it with fun anticipation rather than thinking of a future chore. That’s because the other things I got and have used for this (like WordPress, Twitter, Digital Comic Museum etc) have been fun, useful and productive. Building a Personal Cyberinfrastrucutre could be a lonesome, overwhelming chore, but with a guide and some  pardners, it’s exciting personal progress. I reckon I’m gonna gonna do some panning for gold. Maybe make some myself (probably the fool’s kind, but it’s shiny, too).

Here’s some gold for ya to brighten your day 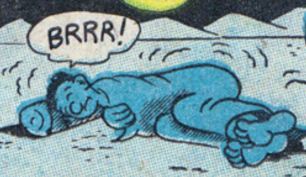 A new verse of Home on the Range, for Daily Create #TDC1471 in honour of my furnace.

Not working, no heating today;

Through three sets of chattering teeth.

Where the air is so cold, cuz it’s from outside,

Yes I would exchange my home on the range

for one in a warmer clime.

Gather round the campfire while I weave you a tale. A tale about what I have done to contribute to #Western106 in its first week. A tale that will be known in legend as ‘Some things that happened’. If you’re reading this, you are part of that legend. You read about these things that happened and contributed to the legacy. Good on ya.

To start the excitement, an introductory tweet was volleyed out into the world:

Included in this tweet was a link to an introductory blog post, staking my turf, marking my territory. http://Howdy, Western106! This blog post set the tone and path for this experience. To be clear, the tone is 50% don’t know what I’m talking about and 50% let’s talk about it any way! And again, to be clear, that path is: like that way or something.

As if you were not yet overcome with the prolific start, what came next! Another Tweet! And a Tweet that signified another blog post. A post to let you know more about what I don’t know and how I’m going to tell you about it anyway.

Also, to throw more fuel on the fire: A Daily Create:

#tdc1468 #ds106. This is the steel horse them cowboys and cowgirls coulda used in the Ol’ West. Wheels of Life pic.twitter.com/ZcTEO4DSQ3

As the campfire of the week diminished, I updated my Blog’s About page and also did another Daily Create or two but seem to have lost track of them. If you see them roaming the lonesome west, corral them in and bring them back to the homestead would ya?

Tune in next week for another episode! 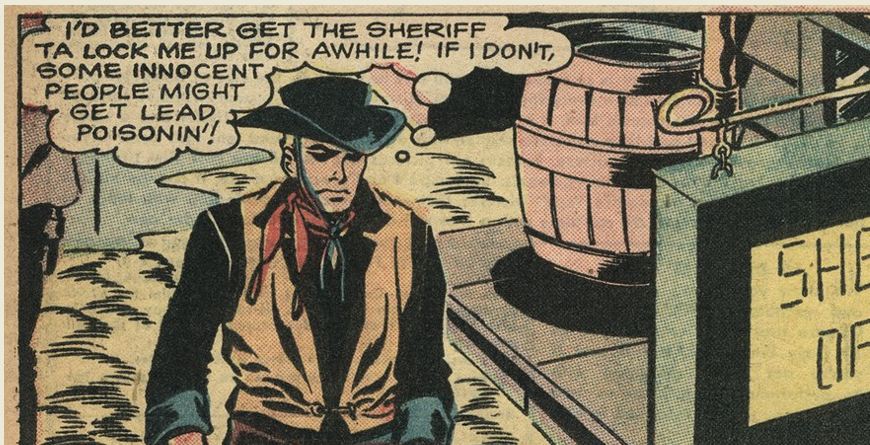 The term ‘Western’ draws to my mind dusty, sandy land with craggy mesas in the back ground. Small towns in the middle of nowhere thrown together in no time at all. Men usually look dirty and smelly. Women often wear outfits so complex you’d think they would get in it just the one time and stay in it forever, yet they somehow always look crisp and clean. Approximately 30% of people are wearing ponchos. Holsters are everywhere. When you live in a place where the law is not quite in control, you’d probably want to be able to shoot your way out of trouble. This may still be a problematic attitude today.

Where is ‘The West’? Well the obvious answer is it’s over there to the west. Somewhat south, too because it usually seems hot. Maybe it’s Mexico. Mexico is probably close by anyway. I remember seeing Unforgiven when I was quite young and thinking it was a weird Western because it didn’t seem so hot all the time. So am I wrong or is Clint Eastwood? It might be me. I’m just describing to you how I have ‘Western’ stored in my brain. I haven’t seen a new Western since maybe Django Unchained, but that was kind of a Southern wasn’t it? Was that a ‘Southern’? Being from Canada, I think we should start a new genre called ‘Northerns’ where we just re-shoot classic westerns in snowy locales where we can see our breath and we have a tough time shooting with mittens on. The trailers for Hateful Eight show snow everywhere all the time. What are you doing to my understanding of ‘Westerns’, Quentin? You’re messing it up.

In my dusty, hot Western world imagine how uncomfy it would be after a big rain? Mud everywhere, can’t just throw your stuff in the laundry. You probably have to hike to the top of the mountain to find a creek to rinse off and beat your clothes with rocks while you freeze nearly to death in your birthday suit.

Anyway, this important piece of literature you just read was to let you know what a Western means to me right now. Let’s see if that changes as I continue to sit around this #Western106 campfire. See y’all next time! 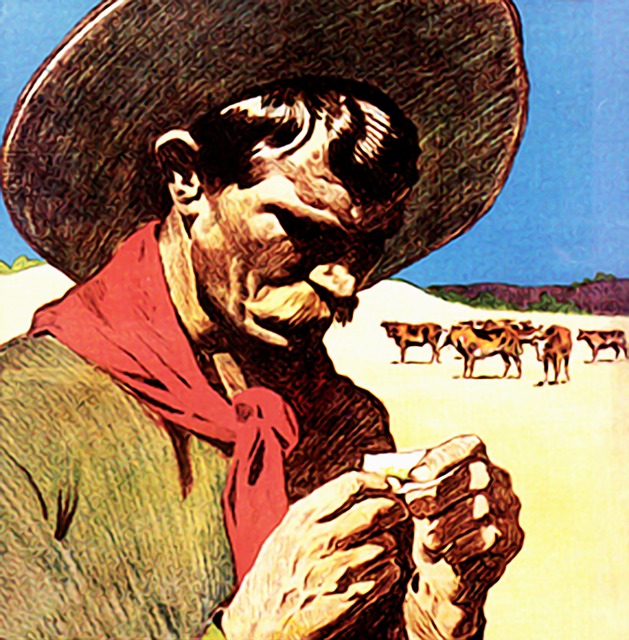 Mornin’ ladies and gents, I’ll be coming along this caravan ride through the wild west of the Internet. I hang my hat in Central Ontario, Canada where we have a Wild West ethos, with a little bit of North East thrown in. I passed my younger days in Western Canada where no one remembers which laws to follow and blames the guvmint for the milk going sour. Anyhow, I make my living at the local college as a learning technologist which I don’t think was a job back in the old west.

I’m taking this dusty westernDS106 road with you to learn me a few more tricks to put in my saddle bags. More ways to lasso the learners into learnings. To add some story, some yarns to tell around the virtual campfire. What do I know about this stuff already? I’ve given it a go in the past embedding story into online courses. A little Wild West approach might be just the ticket to break out of the corral and make online learning more of a good time. I want to learn how to create in all them categories we added to our blog on the left hand side there, in all kinds of different programs and software.

If I’m going to stay on this path, I’ll have to hunker down and do it everyday, but also, I’ll have to kill two birds with one stone and create things I can use for this here school house I’m working at. It should be quite a quest. Saddle up and see you out there!