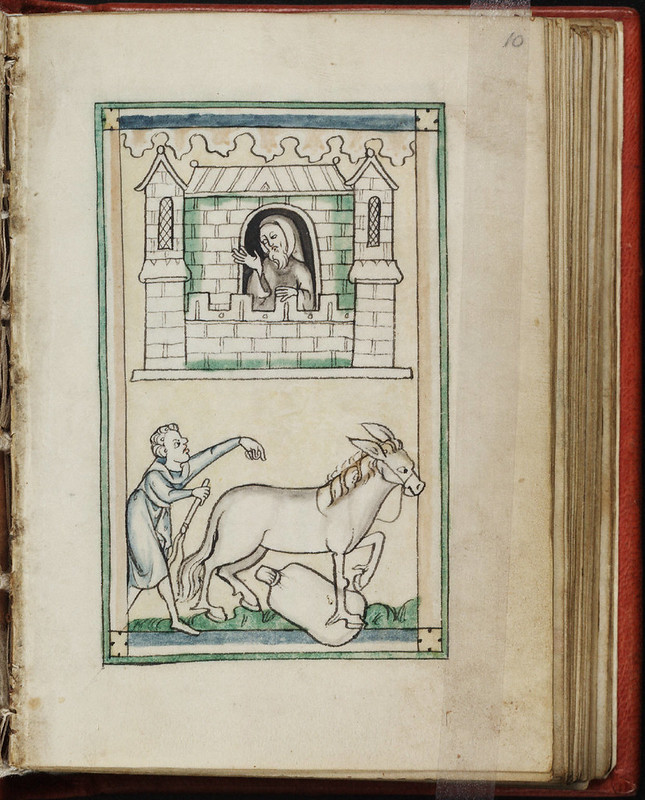 Daily Create 1574. 500 years ago they didn’t have Craigslist or Kijiji so you had to wander down the streets hollering that you had something for sale. One day young Craig was trying to sell or trade his burlap sack to try to get a bite to eat. But local grump Leon wanted the boy to keep it down so he yelled to the boy ‘Keep it down no one wants to buy your horse!’ And Craig said ‘My horse is not for sale, it’s my burlap sack that is for sale good sir!’ And went on his way.

There just happened to be an artist taking a painting of the scene at the time so this seemingly uneventful event is recorded for history.

When I woke up this morning, I had a feeling I would be spending a few minutes today writing a back story for Medieval Death Bot for Daily Create 1571. It’s just so obvious. Here it goes:

John de Waltham, struck upon his head with malice in 1322 by John Myng in the lane called “Shitebournelane”

When one is unfortunate enough to be born and bred on ‘Shitebournelane’, one has to deal with a lot of shite-talking from the nearby, higher class streets like ‘Nottoobavenue’,  ‘Decentlivingdesac’ or even the really fancy ‘Cuppladentistsliveherevard’.

And so it was in mid-June of 1322 that Johnny ‘No Soap’ De Waltham of Nottoobavenue sauntered through Shitebournelane, tossing out his usual stream of clever yet foul invective at anyone who had the misfortune of being ‘of Shitebournelane’, for the last time.

The irascible John Myng had heard enough. John De Waltham had called his mother a ‘Fustylug’ for the last time. Mr. Myng struck John de Waltham on the cranium with a brick that had fallen off of his house just that morning. It was generally seen as an overreaction by all. John Myng went to jail and rightly so as murder was a crime even back then. 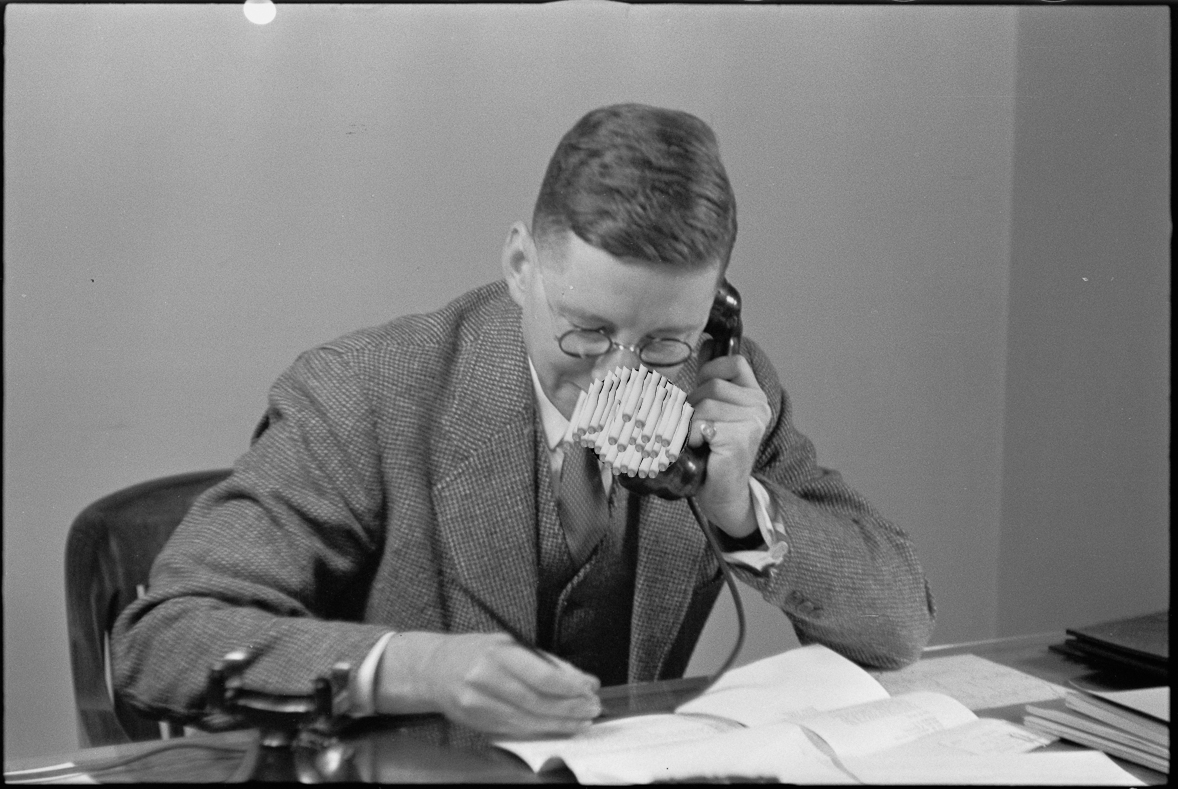 Some meanie named Roy Stryker hole punched a bunch of Great Depression era photos because he didn’t like them. Today ds106 Daily Creators are trying to help unpunch them and give them new life. My first attempt was a light-hearted jab (light-hearted is something new I’m trying) in which I try to show that Stryker was just trying to hide this guy’s serious smoking addiction.

But then I wanted to cheer up a more serious one. Who hole punches a baby’s head? For shame, Styker! For this I used the latest in disruptive Educational Technology: The Samsung Galaxy S5 Kids Mode App. Specifically, the camera bit that automatically pops a silly hat on your head. I did it in the most professional way possible: I used my phone to take a picture of the picture on my desktop. Top quality ensued. If the results could speak for themselves, they would maybe chuckle lightly. Now he has pictures with a birthday hat, a toque, a cowboy hat, a daredevil helmet, a cute little sunhat and I couldn’t resist giving him a little mustache and beard, too. A little bit of hole punch shows here and there, but I ain’t no perfectionist! Take that, Stryker ya dink! 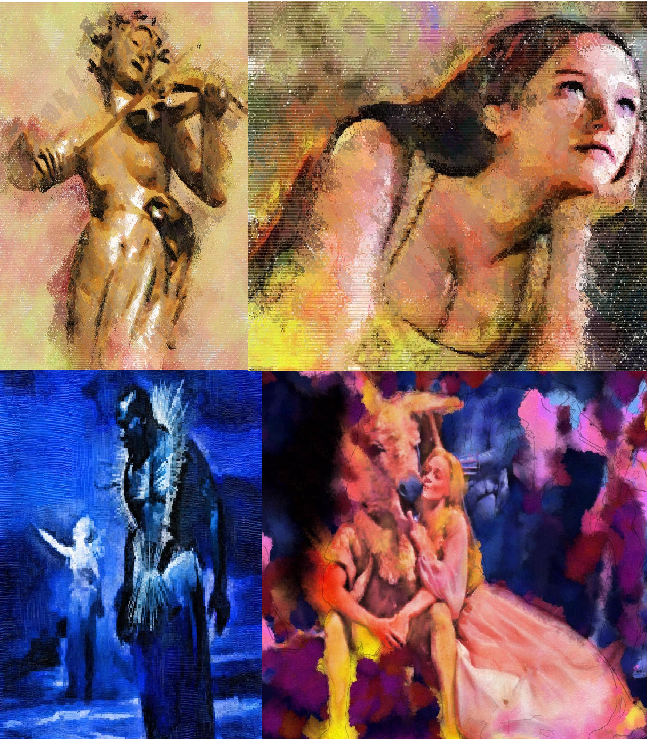 I’m not much of a Shakespeare buff (yet! There’ still time) but I do think he is pretty cool. It’s nice to have the chance to use the word buff, too, even if it’s in the negative. My favorite play from Bill is MacBeth. That story always cheers me up.

All this week Daily Creates have been to post imagery to do with various lines from Shakespeare. When I assemble all five of my posts in one spot here I predict we will see that the whole is weaker than the sum of its parts. Let’s find out! (insert Law and Order WAB WAB sound)

I used @mhawksey’s wibbly wobbly timey wimey thing from OER16 to make it seem like Yorick was at the conference. He wasn’t for reals though!

I took this picture of this pretty lady for Day 2. She totally doth.

Find a photograph that captures the words of Shakespeare. Even better if you can go beyond the literal.

I subverted some of Bill’s words from Macbeth to say thanks to Open Educators like the DS106 crew.

I ran through about 50 different vague ideas here but they all involved butts and bums…I thought I needed more coffee to get through this. And then it hit me! Also, the grand return of my low-intermediate MS Paint Skills!

As previously mentioned. I’m not much of a Bill buff, so I had to think about this one and what it meant. I didn’t think too deeply though because this ended up involving a chat box and Kijiji, of course.

There you have it, I hope you enjoyed an inconsistent and innocuous week of Shakespeare through me! 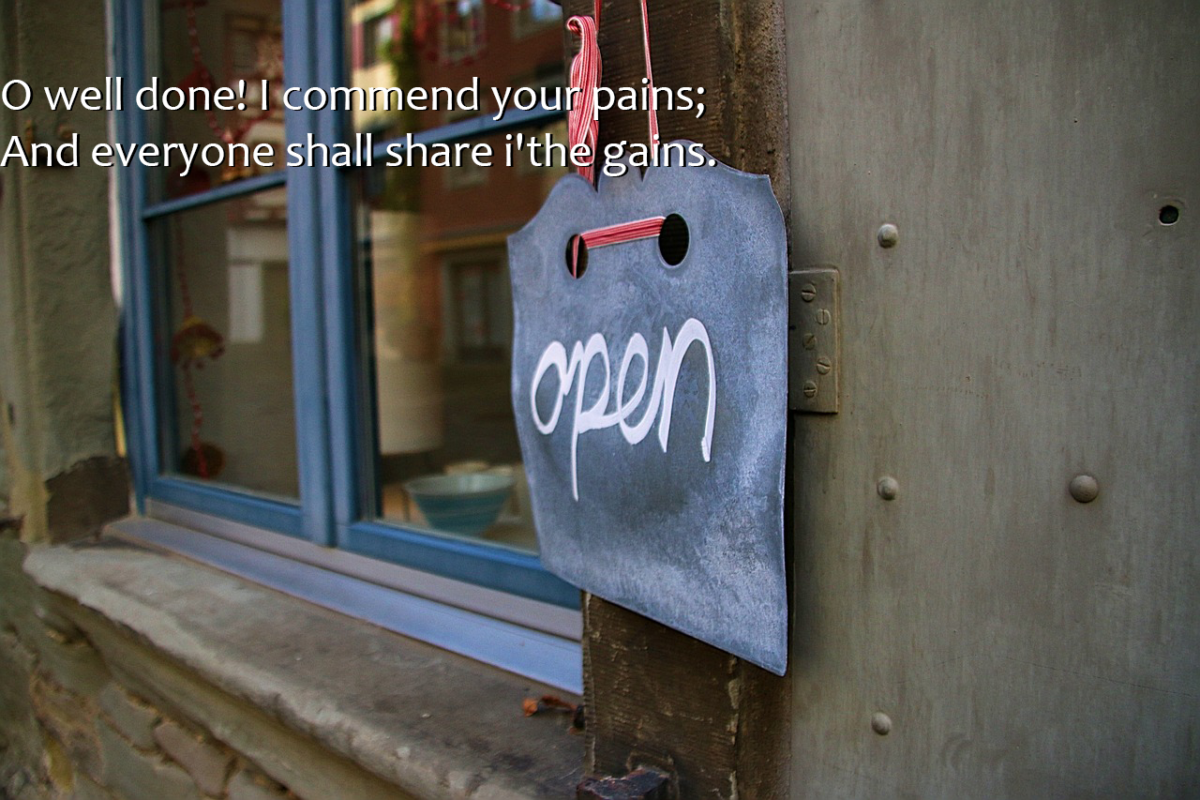 Daily Create 1564 Find a photograph that captures the words of Shakespeare. I found a picture under CCO public domain here and borrowed it. I then found some of Bill’s words in a little known play called MacBeth. It’s a Rom-Com, I believe. Anyway I think I’m subverting Bill’s words. In the play it is Hecate thanking the witches for being baddies. I’m using the words to thank those out there who are into sharing and promoting Open Education. Thanks y’all! 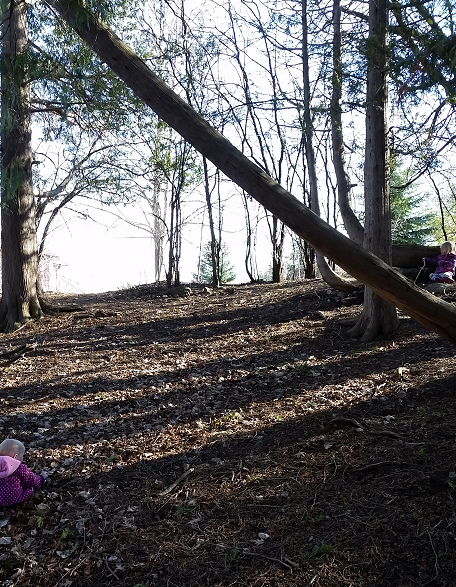 Daily Create 1559 This here tree is not alone per se. It is among friends. But it is living its life its own way, in its own direction. Not straight up like those other unexciting, assembly line sheep-trees. It chose not to grow up, but up and over. When you look at the picture, do you notice the straight up trees? No, because they are boring. You look at the brave leaning tree because it is different and it doesn’t care what the other trees think. The other trees are cool about it, though. Trees don’t bully each other. They are trees.

Anyway, the leaning tree spent its whole life growing up and to the left not knowing that one day, two small, purple-covered entities would wander in to the little tableau it had so dominated its whole life and join it to form nature’s % symbol… or maybe more of a crooked ÷ symbol. Luckily, I was there to record the moment and save it for all humanity and treemanity.

I think it’s time I said thanks to DS106 and to list the things it has done for me. Not that I’m stopping. I’m just getting started. And who doesn’t like a good list? #46 will shock you!

Actually the list has only 3 things. But they’re biggies! I’ll keep this short and sweet so that people with short attention spans like me might read it.

I’m plenty happy to be a small part of the community, so thank you all and see you out there! 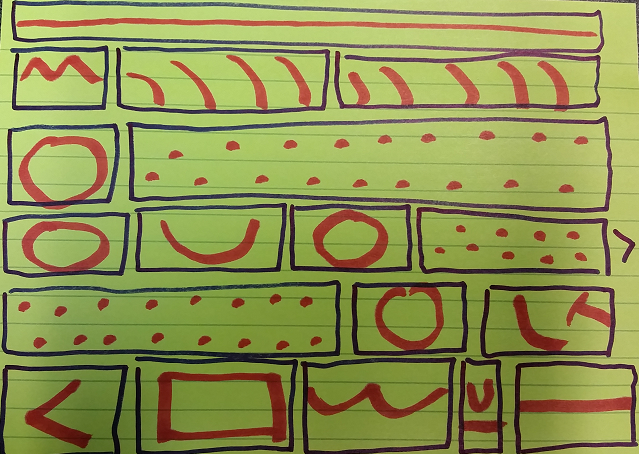 TDC1555 My Day in Grids and Gestures… I did grids, but my gestures are more like just shapes… I only had 5-10 minutes though and it’s Monday morning so gimme a break!

Here’s a vague legend into what you’re looking at represented: sleep, water, sounds, smiles, mouse clicks, biking, sliding, swinging, eating, viewing, water, a little bit of time to ourselves and sleep again. And then do it again tomorrow! It’s a pretty good set up. 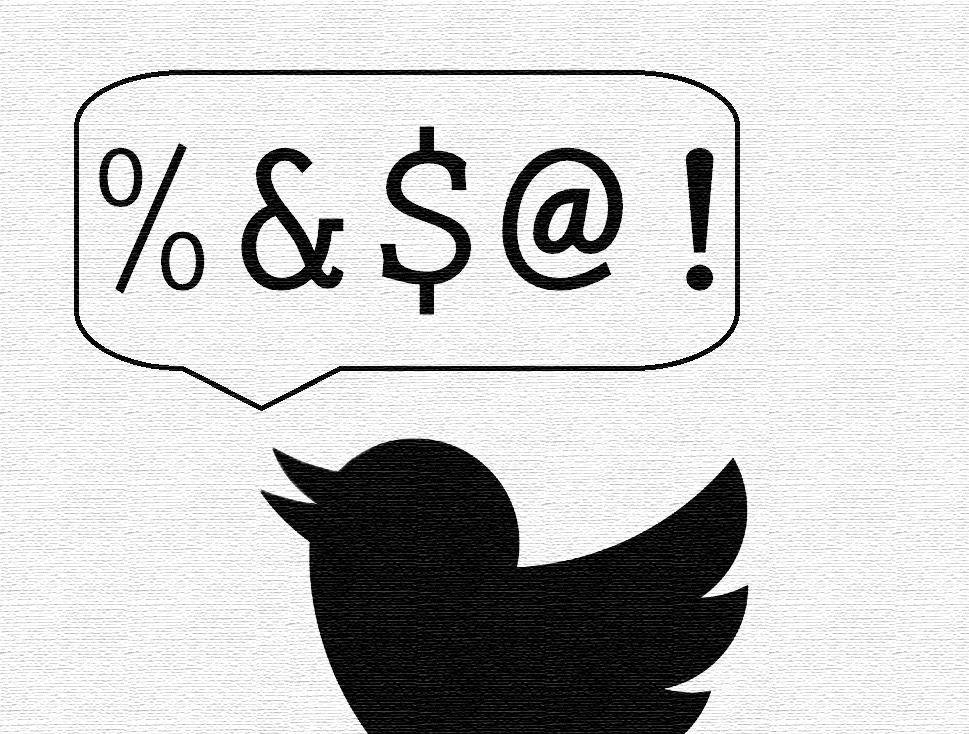 DS106 Daily Create #1552 You probably have heard of the number 4, but did you know that it was a very powerful number? More powerful than 3, that’s for sure. Today we celebrate the power of number 4 and all the things you can do with it.

Let’s get down to the nitty-gritty business of this all. Why is 4 so powerful? It’s simple. The number FOUR is the owner/operator of the ALL POWERFUL FOUR LETTER WORD.

So today, I make art to honour the 4 letter word and today you should use one of them on someone who irritates you. The S-word, the F-word, the C-word, The H-word, The U-word (haha there’s no 4 letter U-word I gotcha!). Enjoy, but remember to use your powers wisely.

Daily Create 1548 is to find yourself on a billboard and take a selfie of it. I don’t know how anyone else is finding themselves on billboards in order to take a selfie. I wasn’t sure, but I didn’t think I’d ever been the subject of an ad campaign for anything. I wandered the earth searching anyway. Couldn’t find myself anywhere! But I did come close. I was wandering down a freeway in Manaus, Brazil, just about to give up, when I spotted my face in graffiti, peeking out over a billboard. CLOSE ENOUGH! I took a quick selfie, made my actual face peek into the frame just like my graffiti because that is silly, and here we are!

Kind of weird that my face is in graffiti in Manaus, Brazil, though. What’s up with that?

image attribution was not necessary but here’s a link anyway