As a Program Manager at eCampusOntario, the program I’ve been managing the most is the Ontario Extend faculty development/enrichment experience. It has been a delight. But something even more delightful (and screamy) is on its way to our house soon, so I will be going Extend silent for June to September as my family prepares to welcome our third daughter to the mix.

What I have been doing in Extend is a lot of behind the scenes connecting and in front of the scenes cajoling of educators to join in on the Extend community. It’s not that hard really, because Extend is just too much fun and truly beneficial to educators. It’s not something to do so much as something to be a part of.  Something that will help you grow as a technology-enabled educator without you really noticing that you are, in fact, growing. I look forward to being a part of it again, but we have a hell of a replacement for you.

This feels a little bit like when I was learning to drive. I got to take over the wheel to drive around town a little, but after a while it was time to hand the wheel back to the real driver, who would take us to the next destination.

Soon I expect you will see a post on Alan Levine’s blog (cogdogblog.com) with not only some thoughts for what Extenders can do next, but also a way for you to get your hands on the steering wheel a bit, too, to help us decide where to go. Extend West will continue through the modules for the next few weeks and then, together, you can all decide where to go next. I look forward to seeing where it goes.

As a bonus for you for making it this far into my post, I want to point you to something that Alan made that may help convince you to hop on the Extend big toy this summer if you’re not already: Edupunk. It’s a mockumentary in the vein of Hard Core Logo or Spinal Tap. Some day I hope the ultimate Extend Activity is us all getting together to make the Extend Mockumentary.

I’ll be here for another week or so and then back in September, probably deeply in sleep debt, but raring to jump back on the ride. Have fun!

Yes. Yes of course she does.

I sat down this morning to check on Helen’s Ontario Extend work to see if I could award her a badge. I have now completed checking her work in the Teacher for Learning module. There was never any doubt in my mind.

Here was my process:

Navigate through the Teacher for Learning module until I get to an “Extend Activity”. Click “Take it To the Bank”. Scroll through the responses. Has Helen submitted one? YUP!

There you will see a link to a post on her blog which is a response to the activity. Repeat this process 8 times. Each time, it’s a yes. All of them wonderful responses. Here’s the evidence:

Who’s next? Apply for your badges at the end of each module, like here for example. 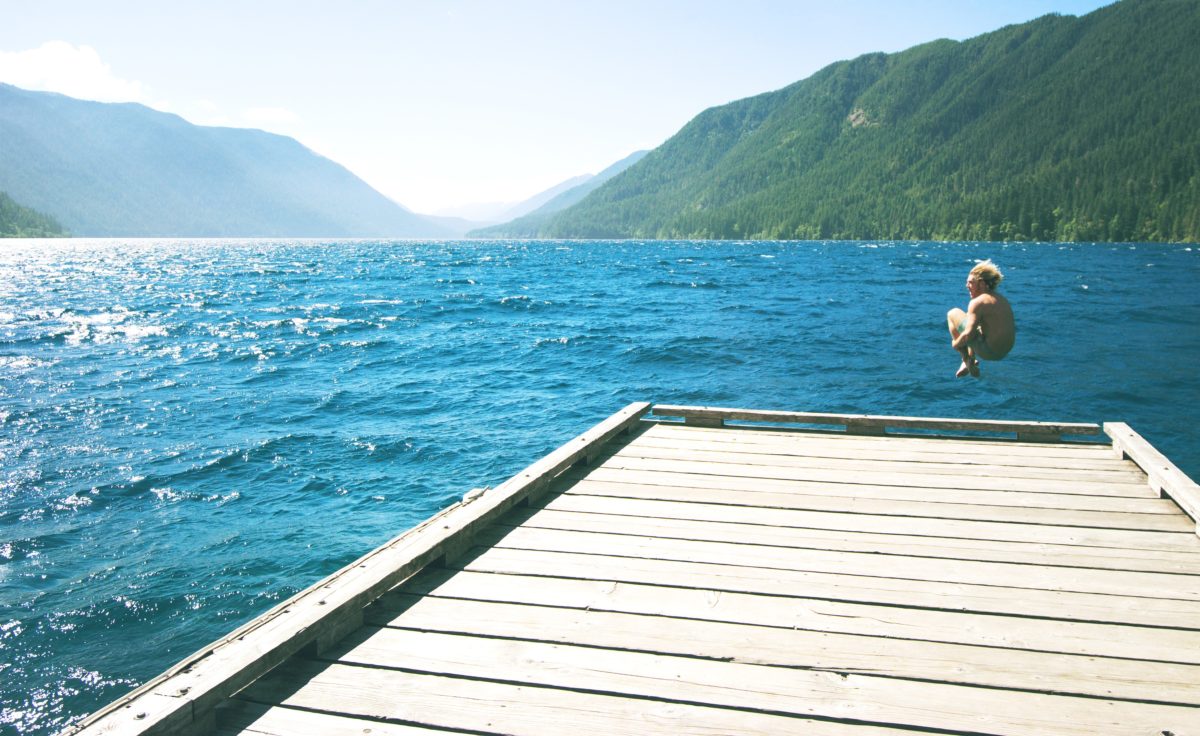 Today, I invite you to have a little think about what you’d like to do with your time in the Extend West cohort and maybe consider another piece we have to offer you as a member of the community.

Let’s be clear, all of the settings pictured above are all completely unofficial. They are also all equally important. I think that a nice mix of levels of engagement are healthy for the community and you are free to move up and down the swimming-in-a-cold-lake analogy continuum as you wish.

But today I want to make sure you know about the cannonball option. The jump right on in and see what happens option.

In other words, we have a number of self-hosted Domain of One’s Own sites to offer Extenders who would like to pursue the Ontario Extend badges. eCampusOntario has purchased (2 year’s worth of) some sites to help increase the open sharing of pedagogy by Ontario PSE educators. If you are interested, email extend@ecampusontario.ca and we will follow up with your next steps.

If you’ve already begun blogging on your own site, have no fear, we can help you move over to a self-hosted site.

So, what do you think? Make a splash?

There is now a pretty strong neural connection in my brain between Sarnia, Ontario… This is not something I ever anticipated happening to my brain, but I am very happy about it. I was in Sarnia on Tuesday with a group of Ontario educators and we were getting outfitted to jump in to the Ontario Extend community.  As it turns out, we needed a little help from Durango.

You see, Alan Levine (aka CogDog) is obviously the best qualified person to give us a tour of his architecture: the layout of the Daily Extend, Activity Bank and Domains sites of the Ontario Extend Studios.

I think that many Canadians should be rejoiced to know that Alan is, right now, MOVING TO CANADA!

Just think. He didn’t even wait until he was finished moving to start showing the Ontario Educators in the Extend West Community the ways of Extend and how it can greatly benefit their technology-enabled teaching and learning skills. He was on his way, driving from Arizona to Saskatchewan, and stopped for an entire day to join in on the Sarnia kick off via Zoom. His wonderful hosts in Durango gave him their kitchen and WiFi all day to make it happen.  He’s even stopping again a little farther along in Fort Collins, Colorado to whip up another blog post for us to keep us rolling. Look for that in the West Cohort Domains page tomorrow.

So, in trying to think of a way to say thanks and give something back to Alan, I think I came up with an idea for tomorrow’s Daily Extend. I am going to do it right now so that I can be ahead of Greg Rodrigo on the leader board, even for a short time.

Alan Levine is coming. Let’s make sure he knows why we love Canada. Feed him some tidbits of Canadiana to make him feel at home.

Here is my response. On the way to Sarnia, I had my (ancient) cd binder with me in the car. It is full of 90s Canadian music. I popped in Spirit of The West’s “Save This House” and was struck by the lyrics to “Turned Out Lies”. They could be written directly to some of them big e-learning companies or publishers that may not have the best interests of learning at heart. I thought Alan would get a kick out of the lyrics.

Also, Alan, “Home for a Rest” is probably one of the greatest Canadian songs FYI. Welcome to your new home! You can give an Ontario Extend Cohort a name (and even a watch), but you can’t make it obey the normal rules of time & space.

Next week, we kick off The Ontario Extend West Cohort at Lambton College, and live online! (If you’d like to join in, pop your name in at bit.ly/ExtendWest)

This cohort follows in the footsteps of the Ontario Extend East Cohort that kicked off in March. But what does “East” or “West” or “a set time and place” mean to an Extender? As it turns out, not much. Extend East was kicked off in Peterborough which is kind of in the east part of Ontario. Extend West will kick off in Sarnia, which is west of Western University, so that must count as west, right? But none of that really matters because anyone and everyone are and were invited to join any and all cohorts no matter where you are.

What I mean is that a cohort is more like an on-ramp to joining the greater Extend Universe (if Marvel can make its own universe, so can we. Extender super hero costumes, anyone?). Have a look at what joining the Extend Universe has meant to one such participant (and as a bonus, Lynn will be joining in on the Extend West fun, too!)

If you’re wondering how Ontario Extend works, I am happy to quote my past self from this post:

Together we’ll experiment, curate, and collaborate with technology for teaching and learning. We’ll do it all in the open.

It works a little (maybe a lot) differently than most P.D. events you may have come across. There are four pieces. One of them stays still and the others are on the move. The one piece that stays still are the modules themselves. Six of them: teacher for learning, curator, collaborator, technologist, experimenter, scholar.

The moving parts are where the fun happens.

What I hope and believe the Extend community can be is a slightly informal and loose yet strong and lively connection of faculty members engaged in teaching and learning with technology in the open. If you’ve ever felt lonely in your pursuit of providing great learning experiences to your students, you can say goodbye to that. It’s going to be awesome.

That was from the post I sent out a week prior to the Extend East Cohort Kick Off. I was right. It was awesome. And it still is awesome. It’s like that because the people extending didn’t worry about time and space or getting it done, they worried about sharing what they do with each other. they worried about connecting and building a network of shared experience.

I can’t wait to kick things off again, with that shared experience behind us and still with us. As you can see here, we have an outrageous check out policy. See you next week!