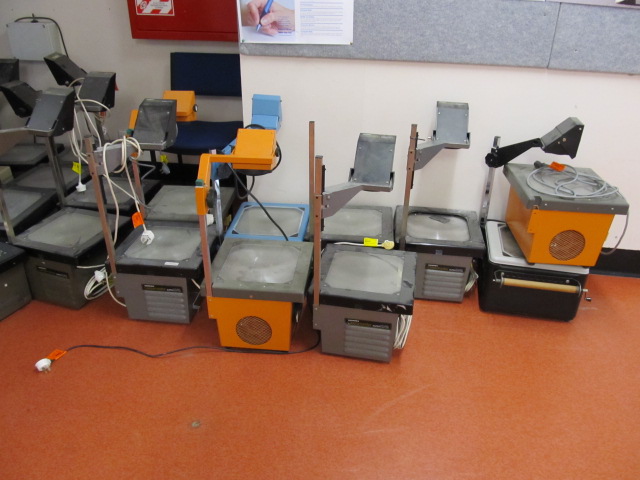 If there were an ed-tech museum, there would likely be a whole wing dedicated to the overhead projector. In its day, it was used and abused like it was going out of style. You know, like PowerPoint.

Also like PowerPoint, it had its moments. One of my all time favorite school moments is owed partly to the overhead projector. And human error of course.

It was the typical elementary school assembly, holiday edition. Everyone sitting cross-legged in lines on the gymnasium floor. The biggest overhead projector they had in the centre, spraying its light on the big, white screen. Christmas carols playing on the speaker, an acetate with hand written lyrics to each song. I remember the handwriting and little doodles of sleighs and holly in colour around the words. “Deck the Halls”, “Santa Claus in Coming to Town”, “Jingle Bells”. Me sitting there, mouthing the words and not actually voicing them.

And then it happened. Time for “Joy To The World”. (play the song below to get the tune in your head now)

I remember the doodles. A frog. What the heck did a frog have to do with Christmas?

And then we all started to read/sing the words we saw:

Jeremiah was a bullfrog!

He was a good friend of mine.

Whoever had taken such care to lovingly write out the lyrics and add doodles to the acetates, had written out the lyrics to the Three Dog Night rock song version of Joy to the World. The music and the kids screaming “Joy to the fishies in the deep blue sea!” did not quite match up harmoniously.

They had meant to bring us closer to Bethlehem, but we ended up closer to bedlam. And it was amazing.

And it wouldn’t have happened without the overhead projector.